The cheese factory “KOUGIANOS” is located at Plati Imathia, in the heart of the Macedonian land.

Feta cheese is famous throughout the region for its tastefulness and authenticity of flavor. In the cheese factory, traditional cheesemaking co-exists with state-of-the-art technology of today. Since 1950, when the cheese factory opened for the first time until today, the cheese production unit “Koyianos Konstantinos” has gained in credibility and stable quality. Nowadays, the cheese factory is managed  by the second generation of the family who are scientists. Kostas and Panos Kougianos are mechanical engineers, and Kostas’ wife, Kiki Domzaridou, is a chemist with postgraduate studies in chemistry and food technology. Thus the quality of cheese is guaranteed “from the inside” as well as the control of the operation of the facilities. The majority of modern equipment is designed and built by them, who know how to comply with the requirements of national and European legislation, while also implementing a certified Food Safety Management System.

These days, their new award-winning line of linseed cheese is presented in Paris and … the rest will be announced in a few days. The sure thing is that you will learn about the good news … first

The history of feta from yesterday to today

The all-white Greek cheese, whose history is lost over the centuries. Mythology wants Cyclops Polyphemos to be the first cheesemaker of early feta cheese that kept it in animal hides. In Byzantium it was referred to as “recent” cheese. First mention of the name fetta we find in 17th century manuscripts in Italy, the cheese was then sliced and placed in barrels.

Feta today is exclusively made from sheep’s milk or sheep and goat’s milk with up to 30% goat’s milk. The flavor is salty, and “stays” in liquid brine or sour milk for 3 months. When the feta cheese “comes out” from the brine, it loses all its liquids and becomes compact. The fat contained ranges from 30% to 60% but usually around 45%. Depending on the hardness of the texture of the cheese we call it soft, medium, hard, very hard.

Feta has been registered as a PDO product from the EU. According to the legislation, cheese with this name and composition is produced in certain regions of Greece, Mainland Greece, Macedonia, Thrace, Epirus, Thessaly, Sterea Ellada , The Peloponnese and Lesvos.

The fight of feta was judged in favor of Greece, despite the reactions of larger countries. The name “Feta” can no longer be used in cheeses of a similar composition made outside and within Greece and by a process other than traditional cheese making.

Kougianos cheese factory the meeting and the tour with Emvolos.gr

At the cheese factory we met the brothers Kostas and Panos Kougianos, who literally grew up in the dairy factory. They are ones of the entrepreneurs who have chosen their hobby for a profession and that is the secret of their success and their persistence to continue despite the adverse conditions of our country, to fight for the best production of feta at all stages.

Our tour of the cheese factory was handled by the food chemist and quality manager Mrs. Kyriaki Domzaridou

Do you produce only feta cheese in your cheese factory?

Our cheese factory is specialized exclusively in the production of feta cheese and Myzithra of A ‘quality from sheep and goat milk.

Does the milk come from local farmers?

We work exclusively with breeders of Imathia and neighboring prefectures of the Macedonian land.

What is the process of collecting milk and controlling it?

Every partner farmer we have placed outside the unit, refrigerated tanks, milk cooling tanks. The milk is kept in the milk cooling tanks at cooling temperatures of 2-6 oC from the moment of milking until the time of milk collection from our company’s ultramodern isothermal tanker. So at this stage we ensure the hygiene and quality of the milk that follows the feta at all stages. Quality assurance is also aimed by sampling of the milk before harvesting. Measurements of the pH values are made, which is the indicator that assesses how fresh the milk is, its temperature, and the detection for the presence of any antibiotics. How do you control the milk percentage to ensure the name feta, according to the conditions of the legislation

Milk control also includes quantitative testing to ensure that there is no trace of cow’s milk since it is forbidden in the making of feta cheese. Besides, the maximum percentage of goat milk should be 30% as defined by the relevant legislation for feta PDO.

How many pounds of milk are needed to produce a pound of feta?

Tell us about the process of “generating” your own feta?

The milk is taken to our dairy where we repeat the sampling and further control of the milk and the production process begins. During the first stage the milk is cleaned, passing through a modern self-cleaning centrifugal separator to remove any extraneous matter which has not been removed or retained in the metal filter provided by the tank and reduces its microbiological load. In the second stage the pure milk passes to the continuous pasteuriser where it is heated to 72 ° C and remains at least 15 ”. Immediately the temperature of the milk is reduced to 35 ° C, so that its nutrients do not deteriorate. Pasteurization ensures that all the pathogenic micro-organisms of the milk have been killed and is therefore ready to pass to the so-called “clean” cheese dairy area. The milk passes through a network of stainless steel pipes in tanks. Here we add the rennet, the enzyme chymosin, which is a component of gastric fluids of young calves, lambs, goats. The rennet coagulates the milk in less than an hour and the curd is made. The curd is then cut into 1 x 1 cm cubes that remain for about half an hour in the serum that is excreted. By saying serum we mean the liquid that comes out when we cut the yogurt for example. The cubes of the curd are guided with the force of gravity in molds having holes, so that the remaining amount of serum can easily come out within the next 24 hours so that the cheese gets the proper consistency. In order not to alter the shape of the cheese, the characteristic cube and in order to uniformly eliminate the serum from all parts of the cube, the molds with the cheese are often turned. How long the feta maturing does last and where is this done?

Our cheese factory produces feta that will mature for three months in metal tinplate containers or in oak barrels, so we also use parallelogram and round molds.

What kind of salt is used in feta?

The cheese is salted on the surface as soon as it enters the containers with coarse recrystallized sea salt and is packed either in metal cans, supplemented with brine that is saline so there is no vacuum left to keep air, either in oak barrels. Metal cans and drums are transported to the next room where they are in the pre-conditioning room where they remain in appropriate temperature and relative humidity conditions to “partially mature”, that is to develop the appropriate lactic bacteria that will begin to produce acid and mature – “bake” the cheese to begin to develop its characteristic organoleptic characteristics, hard texture with many almond holes, sour taste, nice scent.

When do fragrances evolve and emerge?

After the two-month period, imposed by the law, for the completion of the ripening of the feta PDO cheese, Throughout the ripening process the cheese is kept in our refrigerator facilities.

How many types of packaging do you have for your feta?

In addition to the feta, are any other cheeses produced?

For the lovers of the most intense tastes, our dairy produces 100% goat’s milk, packing like the feta cheese and for those who are interested in the light products, there is also a myzithra, which is packed in 1kg “in vacuum” bags

What is your comparative advantage over competition? 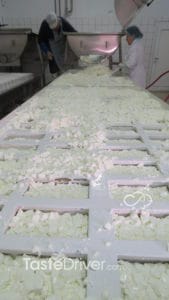 of the plant and equipment has been completed, in order to ensure the proper hygiene environment and to prevent any contamination. To understand the vitality of cleaning, it is enough to tell you that most of the recovered foods are due to the failure of this stage. To ensure the effectiveness of the cleaning process 5 years ago, we designed and built a sophisticated C.I.P. system (Cleaning In Place), which cleans the entire milk processing line and its piping without requiring disassembly of the line. The effectiveness of the system has been repeatedly tested by sampling and microbiological analysis, and with special test kits we have available, it is possible to control it after each cheese-making. In order to be able to control the production and distribution of our products and to offer you constant quality, we continuously record all parameters at all stages of production with full traceability. That is, for each kilo of cheese we record, we know and can show at any demand, untill the day it expires and beyond: what milk, which producers, what salt, what rennet, which containers, etc., we used and when all of this has been produced by our suppliers. What was the temperature of the chambers and coolers with 4 measurements per hour, during the whole duration of the cheese’s pre-maturing and ripening, but also in the refrigerator until it was sold.

So since you manufacture the equipment yourself, you know better than anyone their function, the strengths and weaknesses.

This guarantees the operation of the plant and equipment.

Quality is guaranteed by some state authorities

We continuously take samples and analysis both physicochemical and microbiological, both of our raw material and of our final products in collaboration with governmental agencies, e.g.ELOG (Greek Milk Organization) but also with private laboratories to verify the quality and safety of our products.

We thank you for the tour and the extensive presentation of the authentic cheese-making of the original Greek feta cheese.

We thank you too.