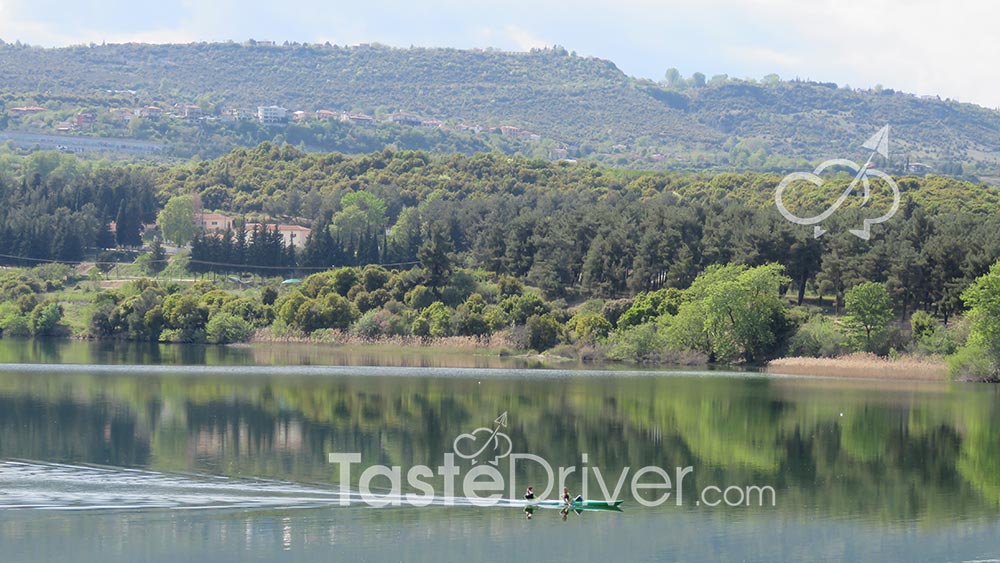 A Garden of Eden, rivers to cool it, birds fluttering. Place from God blessed, favorite of Philip, of Alexander the Great, of Apostοle Paul who walked here, spoke here, stood here… Secret corners from a fairytale, paradise flavors in neighborhoods identical centuries now …

Aliakmonas has been giving life to the land for ages. Mythology wants it to be a river god, son of Ocean and Titanida, daughter of Uranus and Earth. Pliny wrote in 50 AD. “The sheeps which drank the water from Aliakmon changed color and became white, while in Axios they became black” … The contribution of the river to the euphoria of land and animals over the years significant … At the root of the city, Aliakmonas flows bluntly after they have built dams for better utilization of its waters … The Aliakmon lakeside is protected by Natura 2000. The trees touch the river and the birds run out and the wild boars are relaxing. Herons eat and the ducks dive in… Storks across the street live their love … Veria is known as the city of peach. Spectacular show are the flowering peach trees in spring in pink color and in the summer loaded with fruits. Three rural cooperatives exist in the area of Meliki, Mesa and Aliakmonas that deal with the cultivation and marketing of peach. The fragrant fruit, the Persian apple, came to Veria in the years of Alexander the Great. The Romans called it peach and the Verians gave it the name “Midas touch” since it was the cause of the region’s enrichment in the decade 1980-1990.

The Apostle Paul’s Step is a world-class religious legacy monument, the only known historical site that he declared Christianity to the pagans and the second one in Rome. The Word of the Gospel were warmly welcomed in 56 AD and 57 AD. So the role of the Verians was important in the propagation of religion. Veria from the Byzantines was also called “Little Jerusalem” due to the abundance of their churches. The Turks found it very difficult to conquer, they named it Caraferia, black city and in its giant sycamore they hunged the Archbishop of Veria, Arsenios. The passage leads us to Baruta, the picturesque Jewish district, recorded on the acts of the Apostles.

Built on the shore of Tripotamos, next to the homonymous spring it resembles an isosceles triangle. The entrance was done through gates that were hermetically sealed at sunset. The stone building of the Synagogue, of a unique religious traditional architecture, is elaborate with wood-carved ceilings and colorful mosaic tiles. Its characteristic is that it is not like the Christian churches in the middle of the neighborhood but is a continuation of the houses. The Jewish community was disbanded in German concentration camps.

Our walk continues in the beautiful mansions with bold colors … Restored some, they function as small hotels. The Beka mansion houses the Institute of Traditional Balkan Architecture and the rich library of Academician N. Moutsopoulos. The Anastasios Mansion is imposing in colors yellow and blue. Tripotamos is the limit, it rather embraces one side of the Jewish as is customary for the typical of their religion. The walk by the river dreamy … and the birds lovely. I would never have imagined that in the heart of the city, 70 species of birds have been recorded, ranging from female hawks and Accipiter nisus to woodpeckers, brown songbirds and nightingales that reach your hearing limits … Passing the legendary Karahmet bridge, our appetite demands … revani, the city’s emblem sweet. With the same recipe from 1886, Hochliouros makes unique revani juicy, caramel and golden.

The walk in Kyriotissa, the old Christian district captivated me.. like in a dream … Cobblestone paved labyrinths, sometimes dead ends, honeysuckle, vines and bougainvillea, Byzantine old centuries church, mansions with pebbles behind tall courtyards, wood-framed walls and heavy doors with emblems. From yesterday … to today fast. Gastronomy keeps well … in the neighborhood that is filled with life as soon as the sun falls. Most mansions have been converted into taverns, raki serving taverns, cafes and bars. The kitchen is multicultural with fine touches of Asia Minor, Pontos, Vlachia and Macedonia … The fertile lands other than the creations of the land, ensure excellent cheese and meat. Here are two of the best farms in Europe, the farms of Bella and Koutsioftis that grow calves with classical music and massage. Their diet is filled with aromas of the Greek land linseed, oregano, basil, coriander and mint. The research in collaboration with the Aristotle University “give” the excellent beef Aroma, high nutritional value, rich in omega-3 fatty acids, Vitamin E, antioxidants and taste of the dream … Traditional cuisine “enforces” beans in the oven, pies, pisia veal in 15 different versions, varenika, bougatsa, revani, fruity sweets. The best kazan dipi and kaimaki, you will find in Sarai. The Verian composts are sought after abroad..

The main road of Metropoleos was from the 2nd century BC part of the Egnatia Motorway, which the last excavations brought to light. Our last stop is the famous Elia square, the “beach” for the locals, for the joy of the child, good food, coffee and the view of the plain with the peach trees to where the eye reaches … If there is clear weather we see until Thessaloniki.

Where to stay: Hotel Aiges